The Meaning of Baptism for Our Family

(Note: This post is a little different for me. While I do get personal on here, I don't normally talk much about my religion or faith--and I don't anticipate that changing anytime soon. My philosophy is that everyone has their own path to follow, and this is mine. So please read this post with an open mind and heart, or don't read it at all.)

Yesterday, I mentioned that 2011 brought a few firsts in my life. I also mentioned that another first would happen today, and here's what happened: Tammy, Reese, Will, Hannah, and I were all baptised together as a family and individually as Christians. 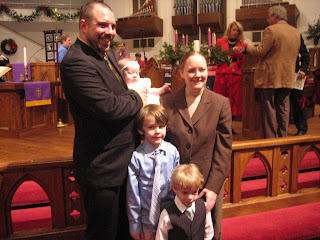 After being members of the Duluth First United Methodist Church for around a year now, Tammy and I decided the time was right to express our faith through baptism. As one of the sacraments given to the church by Jesus Christ, baptism is an essential to salvation for Methodists, though people are not saved by baptism alone.

Growing Up Outside the Church
I grew up outside the church with a few connections on the inside. My grandparents would take us from time to time. A couple friends across the street would bring us along a couple times while we were in elementary school. I remember going to Sunday school and then sneaking off to get candy at a nearby gas station.

As I grew older, I only seemed to move even further from God. I remember having conversations in which I argued against the possibility of God in high school. In college, I seemed to only find more ammunition in my campaign against God and Christianity in particular. I remember even thinking that organized religions were the same as faceless corporations that are riddled with greed and corruption.

Then Something Changed
My first wife has grandparents who are members of the Methodist church in Southwest Ohio. I can say with certainty that Ann and Freeman James of Lindenwald United Methodist Church played an important role in my faith journey. In fact, they still do.

They encouraged me to get out to church and invited me to attend an Alpha Course program with them that lasted 3 months. I took this course in early 2003, so it took these early seeds--when my mind and heart was open--to make me question my worldviews over the next eight years.

Or maybe I should say that even with these early seeds, it took me more than eight years to get where I am today.

So What Happened After That Course?
Within two years of taking the course, my first wife and I separated (with the intention of getting divorced), I found myself in significant debt, and I had to move into my father's house. Plus, I felt like a horrible father (because of the impending divorce) and a failure in many ways.

It's times like these that you really have to dig deep into yourself, and I found myself starting to write poetry with abandon--in a way I had not since my college days. I started running and filling my spare time with work. There were days that I felt like the world was going to end, and there were days that felt like they had unlimited potential. I was all over the place.

Around three years after the separation, Tammy and I started getting involved. Much like myself, she'd grown up around but not exactly in the Baptist church. Neither of us had been baptised or attended with any regularity.

Then Things Got Serious
Actually, that's an inside joke between Tammy and I, but we did get serious enough to meet each other in Ohio (where I lived) and Georgia (where she lived)--and Tennessee (where my grandma lives). When we met in Tennessee, we went to my grandma's little Baptist church next to the lake, and we've been there a few times since.

When we decided to get married on 8/8/08, we asked my grandma's boyfriend to marry us (and last year, he married my brother David and my sister-in-law) in Tennessee. He had a talk with us before and after the ceremony about the faith element involved in marriage, and I think that meant a lot to both of us.

So over the next couple years, Tammy and I talked about checking out a church, but it's scary. Especially for me, I almost felt like it was too late for me to join a church, because I wasn't baptised. Though part of my brain knew this was wrong, another part just felt like I had to be raised in the church to be a part of the church.

Duluth First United Methodist Church
I first started going to DFUMC on Monday nights--not for church, but for Cub Scouts. Last year, Reese started Cub Scouts, and I volunteered to be the den leader for Den 2 of Pack 420. I'm on my second year now, and it's been a fun experience. But it was this initial involvement with the church building that eventually prompted Tammy and I to try attending a few services.

It didn't take long for Tammy and I to decide that we liked the atmosphere, the people, and the leaders of DFUMC. One thing I appreciate about the Methodist church in general is that it's very open and inclusive. This church in particular seemed (and still seems) even more so. So we joined the church last December.

Since we've been members, we've continued with Cub Scouts; we took a United Methodism 101 course that helped us learn more about the history, beliefs, and structure of the Methodist church; we enrolled Will in a Christian Beginnings preschool class (which he loves!); and this morning, we were baptised!

We've had a great year of growth as a family and as Christians, and we intend to continue our development together as a family. Baptism is only one rung in the ladder, but it's an important enough one that I felt it was worth sharing.

I hear stories all the time of people whose decision to walk in faith happens in an instant. It wasn't so with me, just as you have written about the process covering a longer span of time, my journey toward faith was a long process of many little steps...culminating in a baptism as an adult (nearly 20 years ago, now!).

Welcome to the family! :)

I'm glad you decided to share this! Knowing a little more about the real you helps make you more , um, real. And we are each on a journey, whether we've figured it out yet or not.

Just for the record, any Methodist jokes you hear from me are not personal. It's just something we Baptists can't help but do from time to time. ;o)

Praying God's very best for you and your family!

Robert, I am so glad you shared this story. It is a wonderful story of faith. I sometimes think people who are baptized as infants don't appreciate as much as those who take that leap as adults. My blessings to you and Tammy and the children!

Yesterday at church, we saw an adult woman and a nine-year-old boy (different familes) baptized. It's always an exciting thing to see, and I'm pleased and thrilled for your family, too, Robert.

Way to go, brother. Keep it up.

Being a Methodist myself, I was baptised at the age of 19. The twist here is that I wanted to be baptised like Jesus via immersion. So the Baptist Church opened their doors for me and I was baptised by both a Methodist and Baptist Minister. It brought the Churches closer together after years of discontent. Thank you for sharing your story.

Thanks for sharing this part of your life with us! Praise God for His working in your lives!

It was good to hear of the process in your life that brought you to baptism. I remember my baptism clearly, at age 22, and it's one of the best memories of my life. Thank you for sharing. Congratulations.

This is a touching post, Robert. Thanks for sharing this with us and congratulations to you and your family.

Robert, I am pleased for you and the family and by the fact that you were willing to share. I was raised Methodist and served as pastor of Methodist Churches for 4 1/2 years. Through that and my seminary experience I grew to appreciate liturgy to the point that I moved backward a little (in historical terms) and joined the Episcopal Church. I appreciate your acknowledgement of the fact that we all have different paths. Therein lies the relief from religious conflict and one of the few things spiritual of which I am certain. I remain, as through all my life, filled with doubts and questions about divine nature, christian message, and the relation of the church to those things. I am, however, certain that I am a better person for the pursuit of wisdom in that regard and for my involvement with a caring, worshiping community. I wish you the very best in your journey.

This is Good News indeed!!

It's so fitting how the Cub Scouts led you to the church.

"...and a little child shall lead them."

Really enjoyed this post. Thanks for allowing us a peek at your lives, it's inspiring to hear about faith journeys. Happy travels :)

Thank you, everyone, for your comments! Each one means a lot to me. We're very excited about beginning our journey. Again, thanks!

Thank you for sharing your wonderful story. I came to Christ as an adult as well, and was baptized at the age of 25 in my Pentecostal church. Blessings to you and your family.

(And I regularly enjoy your blog, I just don't comment a lot. Keep up the good work. You're such an encouragement.)

I was surprised and delighted to read your baptism story. Sometimes I feel like writers tiptoe around issues that seem "politically incorrect", losing the heart and passion of their lives. Your honesty is refreshing, and makes me want to read your blog!