Yesterday, we experienced another Presidential inauguration and poetry was surprisingly (in often surprising ways) a topic of conversation again, because of two central characters: Richard Blanco and James Franco.


Before getting too carried away in this post, here's a link to Richard Blanco's inauguration poem "One Today"--both text and video of him reading. For an occasional poem written for a Presidential inauguration (with only 2-3 weeks notice), I think it's pretty solid--even beautiful in some spots. The inauguration committee did a good job in selecting Blanco.

Blanco was mostly praised by my connections on Facebook and Twitter, but Mashable has a sort of sad (and funny at the same time) piece that shares tweeps who were less than impressed by Blanco's lack of rhymes. And I'll get back to this, but there was another poetry-related inauguration story, and that is the... 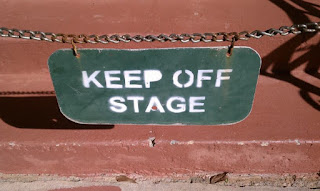 
Before Blanco took center stage, another poet (and I'm seriously not using this term with any sarcasm) was lighting up my social media feeds: James Franco. Apparently, he was commissioned by Yahoo! News to write an inauguration poem (view it here).

It doesn't take an engineer to realize the poem is horrible. There's even a poem about the Franco poem already. But Franco was already making waves in the poetry community because of a book that's coming out from Graywolf Press.

If the poems in Franco's collection are anything like his inauguration poem, then it's pretty easy to speculate that his book was accepted off the merits of saleability--not artistic merit. And that may be cheating both readers and Franco.

What makes me feel sorry for Franco is not that he has a giant platform to sell his books, rather it's that he's making all his mistakes in front of that platform--possibly being told that he's writing great stuff. Every poet has written horrible poetry (I have boxes full of it), but most get to hide that stuff away from the world.


Meanwhile, the whole perception of poetry as something that needs to rhyme that's a-whole-nother problem that's just as hard to solve as how to help Franco develop as a poet. I remember my worldview of poetry exploded when I went to college. I don't know if I thought it all had to rhyme (because we studied Whitman), but I had no idea what poets younger than Robert Frost were doing.

Plus, as a friend shared on Facebook, most poetry on the high school level is dissected (like a frog or pig in science class), not enjoyed. So it's hard for me to go hating on people who don't understand poetry, but it's also hard to figure out how to improve the perception that a poet must were a beret or snap his/her fingers at the conclusion of each poem. Years ago, I had a cousin ask if I was gay when I shared that I was a poet.

So what is there to do but to enjoy the Richard Blancos of the world and try to encourage and help the James Francos of the world? Meanwhile, we can try to help our friends and family--children and adults--learn to appreciate what good contemporary poetry is and can be.

(And yes, I admit it is very hard to not write a limerick or sonnet that rhymes Blanco with Franco. Maybe I'll get to that later today--or you can.)

Check out some other recent Not Bob posts:

Any chance Franco's bad poem is a work of genius in disguise? Such as the "Paradelle for Susan"? Or is it really just bad? (I haven't read it yet, but I take particular interest in Franco b/c his MFA is from my alma mater.)

Only time will tell, Joshua, but my gut feeling is no--not a paradelle (parallel?) situation.

It's sad, funny, & disappointing at the same time. It seems that famous people can have a platform to do whatever they like, even if they aren't good at it & their platform is from The Real Housewives of somewhere to begin with. I'm just glad those platforms don't allow them to become teachers or doctors. That would be dangerous! At least all people risk now is the waste of their money.

I like James Franco the actor and I am intriguied by the idea of a modern day polymath. I did buy his short story collection Palo Alto was very disappointed... The stories seemed very immature(not just the subject matter) the actual writing style. I also read his "inaugural poem" again-disappointed. i will not be pursuing anything else literary from Mr. Franco.