Traveling alone with a lost passport in a foreign country, Bernadette Ignacio found herself in a situation out of her control. In fact, Bernadette found her best way out of her problem was to simply lose control and surrender herself to the world around her. Bernadette is a burgeoning freelance writer and blogger based in the sunny, sometimes sleepy beach community of Ventura County, CA. Being from a small So Cal bubble-town, her life passion lies in exploring the near and far nooks and crannies of the world, and sharing her experiences as a travel writer. Her current blog babies are Words of the One, a weekly wisdom site with posts every Wednesday, and Bee's Stoetry, where she shares short story snippets and poetry from her many international misadventures. Learn more about Bernadette's never ending story at bernadettelynnignacio.com.

I should have been kidnapped...

Alone in the ripped apart pile of my life, I cried until I felt sick. Catching my breath, I tried to keep chunks from flying all over the mess I scattered on the airport floor that cloudy day in Cuzco. Bravery of doing this by myself backfired. There was no one to call, nothing else I could do, so I just hung my head between my shaky knees and cried some more.

Along with my passport I lost my senses. After sobbing myself dizzy, I couldn't think of anything. And without a passport, I knew I couldn't do anything. I felt the strange tingle of on-looking eyes. Hovering above me, stood a silver-haired man looking puzzled, yet empathetic. Glaring through tears, his white shirt glowed against weathered, tan skin. A shiny badge swung from his neck that led my eyes to his.

I felt a burn rise in my throat, and began to word-vomit my pathetic predicament in pathetic Spanglish, wiping snot away with my sleeves. He paused, asked me to take a deep breath, and looked at me the way a dad looks at his daughter after showing him an owie.

This is the moment when the girl agrees, gets snatched, and is never seen again. But I sensed no sign of stranger danger in his kind, old eyes. A small, weak smile cracked through as I surrendered a simple, "Ok."

The months that led up to the day I met Mr. Alexander couldn't have been more carefully planned. It wasn't until 48 hours before my travel troubles literally hit the floor did it all spiral downhill.

In June of 2009, I set out on an epic backpacking adventure to South America. As a 20-something, solo female with a frame of 120 lb., I was a walking target for another horror story abroad in the headlines. So I planned my travel days ahead with attention to detail I thought would make Howard Hughes proud. Travel Visas, check! Flight schedule, check! Monstrous backpack full of first aid sh*t, check! And most importantly...PASSPORT, CHECK!

First stop to the mystic top, Machu Picchu, Peru. Next, Cordoba, Argentina for a volunteer opportunity with orphans. Then, Brazil, where I would reclaim a love lost. Yup, I was out to open my eyes, race to romance, and change the world. And because I had my plans set in stone for weeks, I couldn't be stopped. 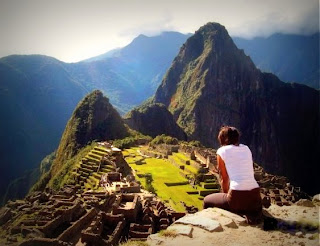 Well, my high horse of confidence got shot down the moment I landed in Lima. It was 12:49 a.m. in the pitch black of Peruvian night, when I finally fetched my "Green Monster" off the conveyor belt after an agonizing line through customs. Surely I couldn't walk foreign streets with no clear direction, bearing that thing on my back, holding a map. I needed a cab. With the first step outside, I got startled from scolds of taxi hustlers. I hastily chose the driver with the most trusted looking car. Off to Cuzco I would go come morning.

Two weeks flew filled with mythic memories fueled by bottomless cups of Macha, or as I called it, crack water. I connected with countless global nomads, but every day, someone moved on. On June 18th, it was me. So I thought.

Six days prior I got a tip from a fellow traveler to book cheap flights through a website called E-Dreams. The catch, she warned, was slow service from the budget booking company. With a week to spare, I assumed I was safe. But worry built up each day I woke to a ticketless inbox. On the night before expected departure, I screamed on the phone overseas, demanding they send my ticket. With frustration of accents and office hours in Europe coming to a close, dread set in. Finally, I got a confirmation number. Still stressed and unsatisfied, I "slept."

I scrambled around the morning market like a maniac; Snack, cash, last minute souvenirs--Fetch the Green Monster, check-out, grab a cab, and race to the airport. Throwing a wad of Pesos at the driver, I ran to the check-in counter two hours before take off. A startled woman confirmed my reservation, and asked for my passport. Reaching into my day pack, I tried to produce it. To my unthinkable horror, my hand found only empty space. A travel nightmare come true.

I tore through my Green Monster in a panic to find it: nothing. With her guts gravely strewn on the ground around me, I collapsed. "I'm supposed to be on that plane! I'm supposed to help the orphans! I'm supposed to NEVER lose my passport!" My head spun with possible places it could've been stolen, or mindlessly left during my mad rush around Cuzco. With time to work, I decided to retrace my frantic steps.

Blitzing back to my hostel, I checked reception. They told me they didn't have it, but what they did tell me was more unsettling. Apparently minutes ago, the man who found it came to see if I was there. Tucked in the pages was a receipt from my stay. They told him I left for the airport, and my airline. He claimed he would try to catch up. Desperate to meet, I dashed back to the airport. Again, I sprinted to check-in with hurried hopes.The same confused lady said a man came, parading my passport. But alas, I was not there for him to find. We were chasing each other's phantom footsteps. Him in search of a hefty finder's fee. Me, my lost key to the world. I waited.

20 minutes passed, then 40, then, gate five closed for flight 918 bound for Cordoba. My $360 dollar seat flew away cold and empty. There were no more solutions, no more options for me to "fix it." At the mercy of my mistake, instincts said I should suck it up. But I could barely breathe. That's when Mr. Alexander found me.

Helping me onto my feet, he revealed his position as manager of the airline. He explained I needed to go back to Lima where the U.S. Embassy could issue a replacement passport. I showed him copies of I.D., and to my astonishment, he proceeded to book me a discounted flight for Lima 300 miles away. He assured that I was to have no issues.

The next step was going to the police for a theft report needed to present at the embassy. He asked if it was OK that he personally escort me there so he could translate my snafu in Spanish. Noticing my apprehension about the "personal" part, he suggested I might be more comfortable in my own cab (which he insisted on paying for), we followed him to the station. It all just happened.

Afterward, he asked if I had somewhere safe to stay that night. I mentioned my hostel, he knew it, and with the same hand-held steps, he returned me to my haven. After hearing my story, they let me stay for free. You see it all the time, a traveler with atrocious troubles. You never think it could be you.

Mr. Alexander handed me his card with that same stern, yet sweet look. "If you have any more problem, you call me OK.”

I wrapped my wimpy arms around him. Smiling, he told me he didn't want me leaving Cuzco with cold memories in my heart, and kissed my hand goodbye. With tears welling up in my eyes again, his beaming white shirt blurred away behind the big wooden door. On June 19th, I flew away.

It is hard to surrender when we truly believe all we have to be is strong. However, sometimes it's about letting go of what you think should be happening, and accepting what is actually happening. Life gives you these moments when it seems everything ought to be perfectly orchestrated because you've prepared so much. Though when left with no choice but to be held in the hands of the universe, it's possible that we be taken care of in ways we couldn't even dream.

The truth is, our concept of control is an illusion, and there comes a pivotal point when we can understand and embrace that. It's a point when giving up seems like the last thing you should do, but really, it's the only thing you can do to save yourself.

What a thrilling story and so beautifully told. It sounds like you've done some amazing things. Glad you're okay!

Nicely done - both the way this is written and the recognition of the life lesson. I'll be thinking about this later.

Adventure is an awakening. In your case it was a real eye opener! A great story (and lesson) well told.

Thank you all for you kind words so far. It makes the stomach sinking moments all worth it.

Wow - that is one heck of a story Ber-nard...hope it's OK to call you that! Such a great piece of writing...one can really feel the emotion of the moment...the gut-wrenching scramble through the bag...the nervousness to be helped by a complete stranger...excellent. xx

Thank you for sharing your story, Bernadette!

What an exciting story, I would have been terrified. Good for you, for being brave enough to travel alone. I'm glad it all worked out. :)

Seems like letting go of yet another important thing to me into the blogoshpere has done some good! I hope the story started your weekend off right! It sure did for me!

This was an interesting story. I don't think there are a lot of tales of lost or stolen items in a foreign country that end as positively.

Love the lessons learned! An amazing story by a truly gifted writer. Keep it up Burns! You are great :D

All the literary love and support is appreciated beyond words. Endless thanks, especially to Robert for the opportunity to share my story. Even if it did instill some gut wrenching reading, it was all worth it to have you on the journey with now. You're amazing.