Here's part 2 of "The Unexpected Souvenir," by Ellen Weeren (click here to read part 1), in which her trip winds down and takes an unexpected turn. Ellen graduated from college with an English Writing degree 20 years ago and began her career as a law enforcement policy writer, newsletter editor, and conference planner. When her second child was born in 1999, she quit working and quit writing. Then, three years ago, her husband was very unexpectedly offered a job in New Delhi, India. After Ellen literally threw up, she moved her family across the ocean to a country she knew very little about. She knew it would be amazing but she was also more than a tad overwhelmed. As part journal and part therapy session, Ellen started a blog about her family's adventure--A Reason To Write, which has received international recognition as one of the best travel blogs in the blogosphere. Moving to India was a gift in many ways--a gift to see what rest of the whole world is really like, the gift to travel, and the gift of many reasons to write again. Ellen enjoyed writing so much that she started a second blog called A Reason To Read, where she reviews books. Since returning to the U.S., Ellen continues to pursue writing and is even now dabbling in a little fiction. You can follow her on Twitter at @EllenWeeren or @AReasonToWrite. 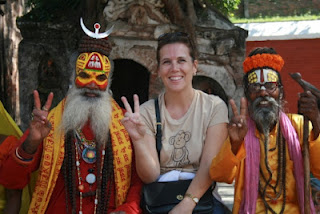 As I was putting my phone away and sinking into my seat, I looked around at the busyness on the street. It was chaotic and endless. It was hard to pick out a single scene and focus on it. The realization that I was now exhausted began to settle in and I leaned back in my seat, turning the air vent toward my face.

But then just over to my left, a man came into view. There was no reason, really, that I should be drawn to him. He was loosely defined in the same dusty, brown haze as the foggy air that surrounded him. He wore a simple and stale, used-to-be-white robe and was standing in the middle of the road. In between traffic and blinks, he could have easily disappeared. He looked like he needed help.

It was not immediately clear just how truly desperate he was. You can unfortunately and unintentionally become numb to the desperation in India a little too easily. Even with the biggest most generous heart, the knowledge that you simply can't help everyone graciously lends you an excuse to ignore someone who is clearly struggling. 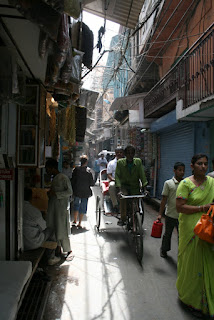 The Reveal
My friends were still on their phones and I am pretty certain that they never even saw what happened next. I don’t know how my driver could have possibly missed it but he showered me with the gift of never discussing it. As the traffic light in front of us turned red and traffic slowed, the man in the middle of the road slowly began lifting the skirt of his tattered robe.

At first, I only saw his bare and wrinkled brown feet. His toes seemed to be bent in half from holding on too tightly to the melting asphalt. Then he revealed his far too skinny ankles. Followed by his knotted, bent, and ashy knees. His skin was stretched tightly over bones that were very likely brittle and deteriorating. They were bones that had probably never tasted milk and knew nothing of vitamins. Maybe they had never even had the chance to be strong enough to allow him to hold up his slight frame with pride and determination or, more importantly, hope.

It took me a few seconds to fully comprehend what he was doing. To allow myself to believe I wasn't just imagining it. But not enough time to distract myself from it--to delve into conversation and disappear or close my eyes and wish him away.

With his skirt fully lifted, I finally began to understand what he was doing. This man had taken straw-colored raffia and tied it around one of his testicles. It had swollen to nearly the size of a basketball. He would lift his robe to show the people driving by just how profoundly he needed help. Their help. And, then, my help.

What Are You Supposed to Do?
Questions raced through my head. How are you supposed to respond to that? How do you digest that? How can you explain it? What are you supposed to do? I wanted to understand how this could possibly make sense. How do you say that, from an air conditioned car with a full belly and new rings on your fingers, you are not going to stop and do something, anything?

I was momentarily mad at India for hosting me in this amazing adventure through the streets of Old Delhi, only to bring it to this nonsensical end. There were so many times when there was truly nothing I could do to make a situation better. But this time maybe I could have, at least momentarily, helped another human being.

As the light blinked back to green, my anger drained back into its more comfortable state of confusion. The "why" of it once again hung in the air as a question without an answer. We drove away but I can never forget his face. His black eyes were unwillingly resigned to accepting his position. His absolute destruction was the way he fought back and garnished attention. 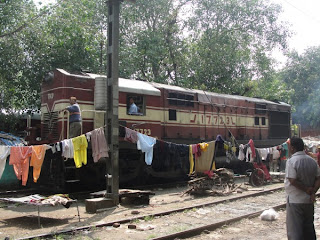 Many westerners might have seen him and railed against his condition, calling him lazy or foolish, angry that he would expect others to make his life better. India has the unique ability to make you feel angry, sad, helpless, and guilty all at the same time. Sights like this man leave the visitor wondering, "what the bloody hell."

I was so stunned that I could not have acted even if I had thought of something to do. Even if I had thought to empty my purse at his feet, I could not have done it. In the tremendous heat, I was frozen. I never even turned my head away. Our eyes met as we were rolling away and he just looked at me as if to say, "Yes, my dear, you are seeing exactly what you think you are seeing, and what are you going to do with it?"

I sat in disbelief that I completely ignored a man who had intentionally mangled part of himself beyond all recognition.

What Am I Supposed to Do?
I still question what I am supposed to do with his image. I am not sure how to handle this experience. What to do with it. I sometimes wonder who would care what this man across an ocean did. How does it relate to life here and now?

It would be all too easy to pretend that his suffering was unique to that land so far away from the home I have now returned to. But struggle in the human condition is universal and need is everywhere, even though it is not always so obvious.

So, while I still regret not acting in that moment, the experience did change me. I am disappointed in myself for not finding a way to make a difference for that man and the thousand, maybe even million, others who join him on the streets of Delhi and other places. 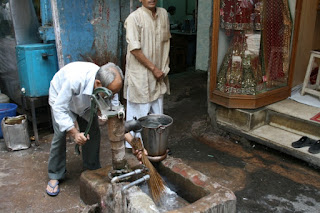 But now, more so than ever, when I have the chance to be helpful, I take it. And, it is most often in simple ways that really don't cost me much more than a few minutes. My actions won't change the world and I understand that. But I can make little moments a little better. It's not that hard really--hold the door open a little longer so the person behind you can walk through it too, smile more, make dinner for a friend, call someone who is hurting, donate food to a food bank, ask how you can help, etc. Most of it can be accomplished without much sacrifice.

I am not able to store this broken souvenir memory of a tattered man across an ocean away on a shelf and let it gather more dust. It is not a picture that I can shove in a scrapbook and close the cover to forget. It lives in my memory and reminds me nearly every day to be more helpful, kind, and generous. I am reminded to slow down and pay attention and not be so self-absorbed.

Now my vision of him has purpose, reminding me to not ignore the needs of others right in front of me. My memory of him matters more than any other trinket I brought home with me--even more than the bright, untarnished ring I bought that day in Old Delhi. Sadly that ring very often sits in the back of my jewelry box, mostly forgotten because it is just a thing that doesn't make much difference in the life of anyone I know.

Posted by Robert Lee Brewer at 8:30 AM